Study: The Effectiveness of the Right Sales Training Reinforcement

The Fact:  Sales people sell more when they know more – whether in pharmaceutical sales, retail or high tech solutions. How do you get their knowledge up quickly and in a way that is sustainable so that it pays off for your organization?

The Study: I’d like to share a recent study completed independent of Axonify by one of our customers that produced some pretty astounding results.

The study involved a group of 100 sales professionals who were divided into two equal groups:

Both groups completed an exam of their current product knowledge and understanding, which resulted in an average group knowledge score of 48%.  At this point, each group broke into 2 different learning paths for 90 days.

The Axonify Group received their training through the daily delivery of bite-sized content, customized to each employee’s specific requirements. This personalization was possible thanks to Axonify’s patented algorithm, which automatically analyzed and identified knowledge gaps, intelligently adapting to the individuals pace and abilities.

The Control Group continued their training regime as previously outlined by their learning facilitator. This consisted of a series of scheduled group learning sessions, followed by a number of eLearning modules pushed out by their LMS, which were completed in a linear sequence at scheduled times.

At the end of the 90-days, both groups received a second exam.

The results were staggering. 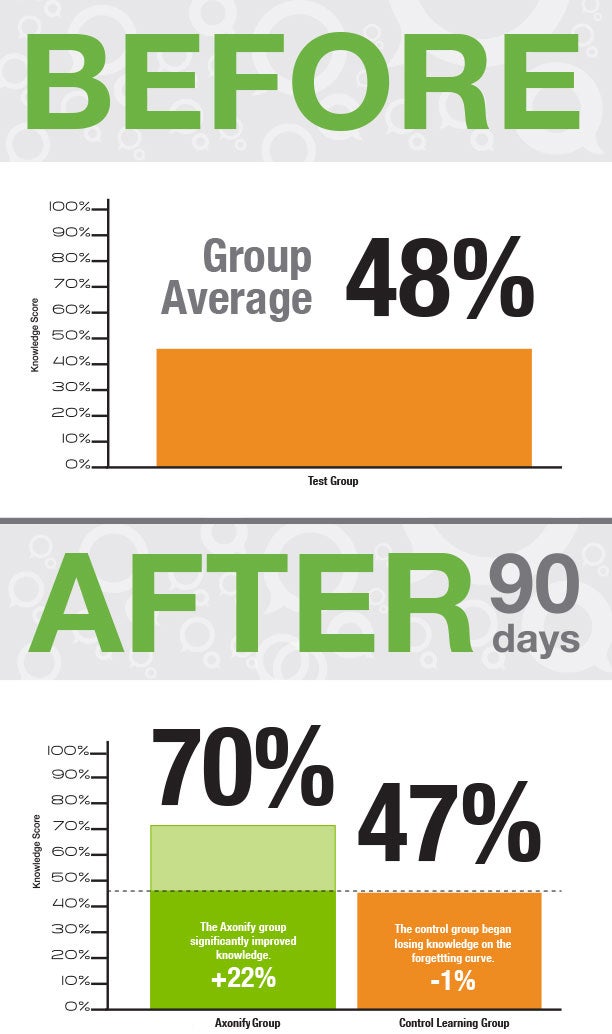 The Results: After 90 days, the Axonify Group improved their average score from 48% to 70%, while the Control Group’s average score dropped from 49% to 47%.

The Axonify Group saw massive improvement, with a knowledge lead of 23% over the Control Group.

So what does this tell us?

It tells us that while traditional learning models sets employees atop the forgetting curve, Axonified employees are proven to retain the knowledge necessary for the actions and decisions that will ultimately impact your bottom-line.

What does your current sales training program look like?

Do you gather all of your reps into a central location for an intensive training period? Is your training material targeted and personalized? Are you tracking knowledge retention? Let us know in the comments below or send us your thoughts via Twitter.